"The Trench!" - a Review from Blazing Combat 4 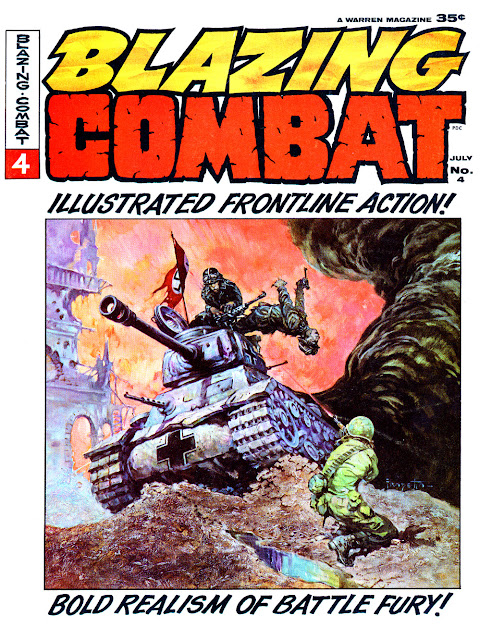 Back in September I featured a retrospective of Marie Severin's work, capped by a superior piece of King Kull art she drew in collaboration with her older brother John. This day you are treated to a beautifully-rendered tale from the Blazing Combat anthology, with John Severin flying solo on the art chores. I've said it before and I'll say it again - if you can get your mitts on the Fantagraphic Books hardcover collection of the four issues of Blazing Combat, do it! Cover to cover, it might be the finest book I own in terms of the quality of the interior art.

As was typical of Archie Goodwin's Blazing Combat stories, he wove tales of morality and of the horrors of war. This one - one of the shortest at only six pages - is well done and power-packed. Let's check out a brief overview:


World War I is winding down in spring of 1918 - still several months of bloody combat remain. In an Allied trench on the Western Front, men contemplate their lot - muddy, wet, the smell of death all around. The trench is hopeless, a virtual prison where death seems the only escape. Comrades leap to the top of the wall in a suicide bid; freedom comes only in covert missions under cover of night. One mission found a grizzled veteran crossing No Man’s Land with two of his commanding officers. The mission turned bad, and our soldier found himself sprinting for his life, to the safety of his… trench. 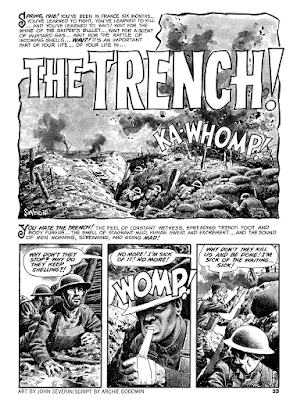 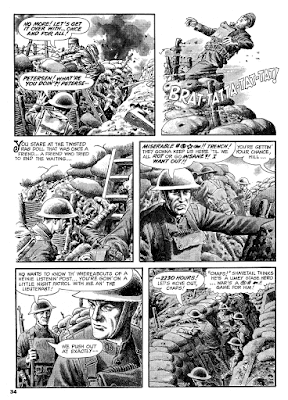 The Good: I love this book, and I love this story - and it's fitting given that today is Veterans Day (formerly known in the States as Armistice Day). Thirteen years before the Hallmark Hall of Fame presented the Richard Thomas/Ernest Borgnine version of All Quiet on the Western Front, Archie Goodwin and John Severin spun a vignette that could easily have been a included in that television film. Here is a clip from the opening scenes, which I feel dovetails nicely with today's review:


Even in Goodwin's opening statement, we're dropped into the horrors that were the seemingly unending life of the trench soldier. I could get a feel for the perpetual dampness, and just a few panels in Severin showed us a panel with "corpse rats", creatures so foul they lived among the soldiers as vultures, waiting for an opportunity to scavenge. The ceaseless threat to life, and the omnipresence of death, were on display as our protagonist's friend committed suicide simply by scaling the trench wall and making himself visible to enemy sharpshooters. While all these things should perhaps dwell in my "The Bad" section of this review, how well done these events are portrayed puts them squarely in the kudos portion of my writing.

John Severin offers a real depth to his characters. His use of shadows and varying lightsource angles offers an almost 3-dimensional feel, particularly on facial closeups. The trench is a character itself, and Severin uses it to create fear and death, but in the concluding panels warmth and safety. In Severin's telling, we experience fear, hopelessness, separation, loss, and after all that, a love for the familiar... and comfort from the very things only moments before had stimulated so many negative emotions. 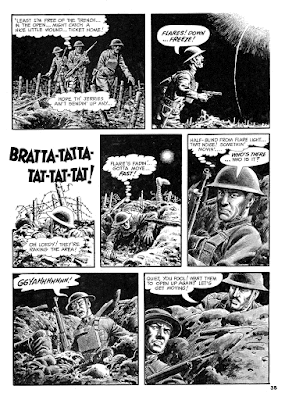 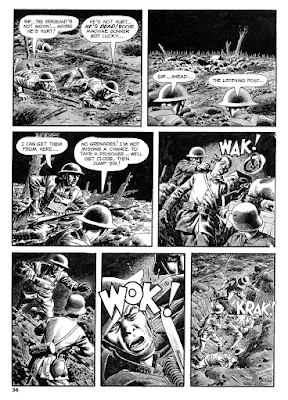 The Bad: So much loss of life. In the introduction to the Blazing Combat collected edition, editor J. Michael Catron explains that several entities conspired to get the magazine canceled back in the mid-1960s - the United States military, the American Legion, and magazine wholesalers. As the Vietnam war escalated, the magazine was forced to cease publication. That was bad news, as the entire contents of the magazine served not necessarily as negative propaganda, but of the human realities of war. For that, Archie Goodwin and James Warren should be applauded, and it's a real shame there wasn't more.

The Ugly: War is Hell. And John Severin showed us. Nuff said. 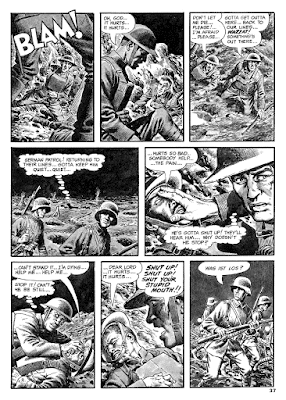 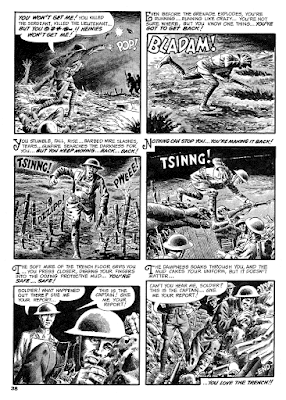