Silver Surfer 8 from the IDW Artist Edition - a Review 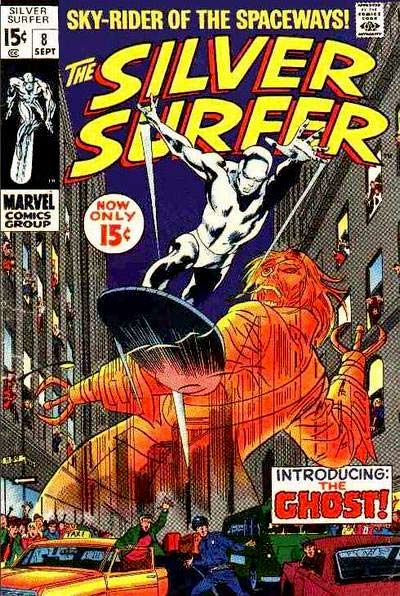 Raise your hand if you have a love/hate relationship with the Silver Age Silver Surfer. He's a cool character - to that we can all agree. But if you've ever sat and read a lengthy stretch of his solo series, you may have needed therapy. It is one of the most annoying, even somewhat depressing, runs of any comic I've ever read. In the hands of Stan Lee, the Surfer is moodily over-written. I think if I'd purchased the books off the spinner racks when they were bi-monthly I could have put up with it. But reading from an Epic Collection, Masterworks, etc. is just too much. Am I wrong?

So what we have here today, friends, is a bit of a twofer. I read from the softcover Silver Surfer Marvel Masterworks, volume 2, and used a few scans from it to place alongside photographs from IDW's John Buscema's Silver Surfer Artist Edition. Who doesn't need a splash of color every now and then? Let's get after it...


Always seeking a way to torment the Silver Surfer, Mephisto schemes a new plot to win the hero’s soul. Finding a human through which to create a conduit to Limbo, the demon is able to summon a once-dead ship’s captain from centuries ago: the Flying Dutchman! After hearing how the Dutchman had lived a hateful, self-centered life and had made a deal with the devil, Mephisto imbues him with power enough to battle the Surfer. But will this new Ghost prove up to the task? And what of the Surfer’s continued quest to reunite with his love, Shalla Bal? Will the Ghost ruin that wish? 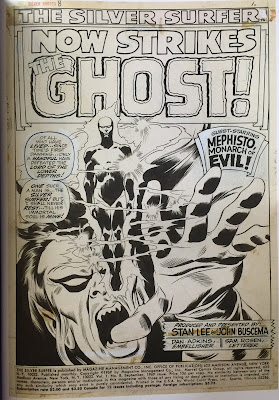 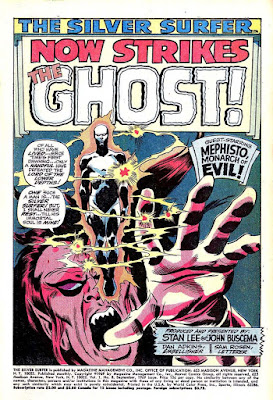 The Good: I love it when characters behave just as we'd expect them to. But wait, you say - above, it was stated that the Silver Surfer could be a tired character. Yes indeed - and that's not who I am staring with. I want to focus on Mephisto. You know, for most folks the Surfer is so closely associated with Galactus, and then perhaps Dr. Doom. But you know who turns up continually in the Surfer's solo mag? The Prince of Darkness himself. I'd go so far as to say he should get a supporting-actor credit. I'm not sure his whole angle about having to find the devil-worshipper in order to create a gateway to bring the undead back to life (wait...) made sense, but then I suppose the supernatural doesn't have to make sense. Probably better just to roll with it.

The backstory of the Flying Dutchman and the creation of the Ghost was well done. I liked the rationale for the character, growing from his past motivations. The Ghost was enough different - and super-creepy - to be an effective updating of the former ship's captain. I even thought it was interesting that he'd get around on his former watercraft. 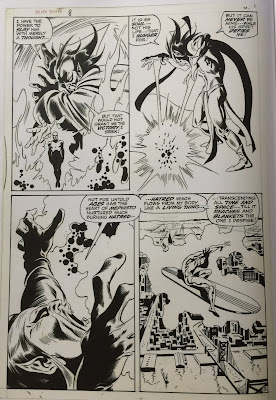 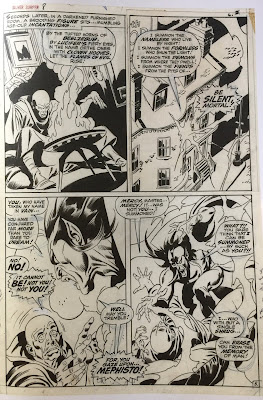 John Buscema's splash page as the Dutchman is revived was powerful, both in the original art as well as the colored version. It might have been a bit more effective, however, with more blacks in the background. But what do I know. Buscema did a marvelous job of taking this dead body and reanimating it in such a way that the two characters looked similar. 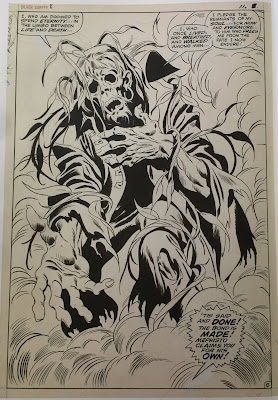 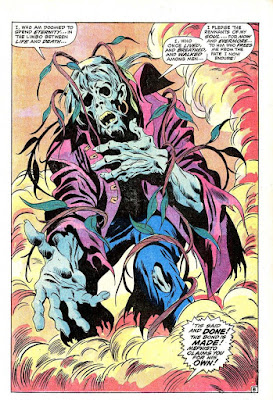 The half-splash when the Ghost is revealed, with a little Kirby Krackle in the first panel, was also pretty awesome. One can almost smell the brimstone from all that swirling smoke! 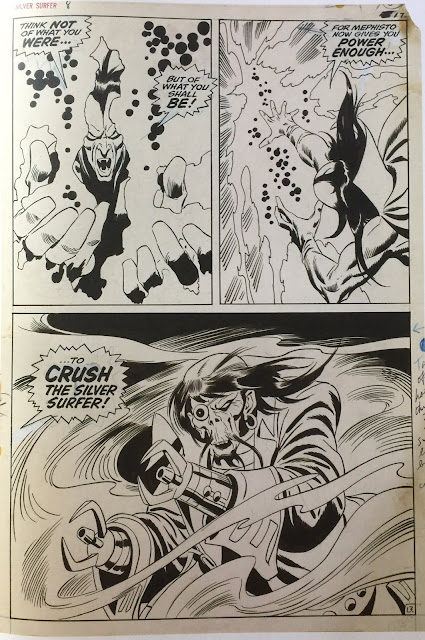 Lastly, that the Silver Surfer hardly appeared in his own mag, but it was still a fun issue, was the mark of an effective plot and execution. 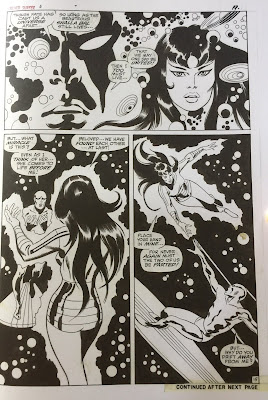 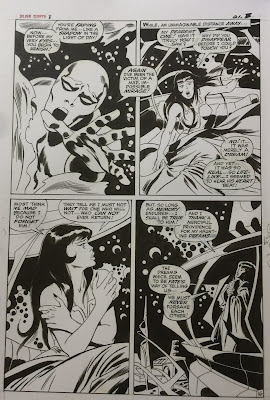 The Bad: I don't have much to say here, as usual. I think I'd just reiterate the vibe I was sending above when I remarked that sometimes this series just wore on a reader. If there was one thing we could count on, it was Norrin Radd's incessant pining for Shalla Bal. And guess what? We got a 2-page vignette of just that in this story! Thank goodness Shalla is so beautifully rendered by Big John. In the hands of a lesser artist, I'd have annoying words and a less-pleasing lady to look at. 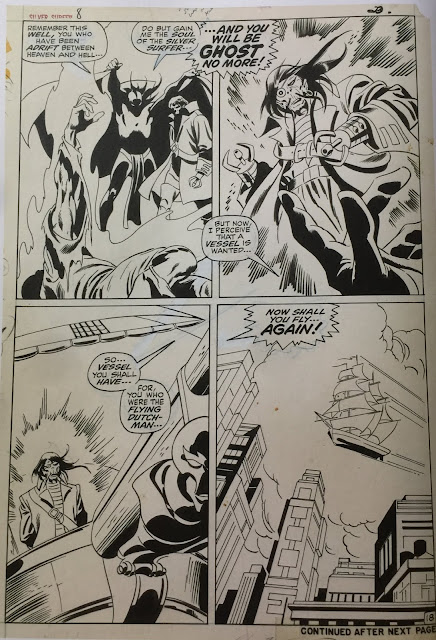 The Ugly: I don't even know what to call what happened at the end of the story. It's sort of the opposite of the Dreaded Deadline Doom in that we didn't get shorted an original story - instead, we got a cut-in-half tale with the promise of a big finish in the next installment. I tossed this out on Twitter a few weeks ago and asked readers if they thought this was a) crafty marketing or b) a way to draw attention to a magazine with sagging sales. Most respondents scored those choices a tie. I've included all the particulars on the last three art samples, which will enlarge for your perusing enjoyment. 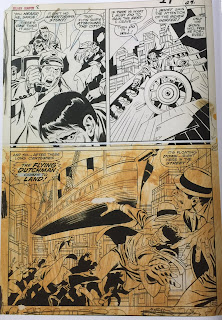 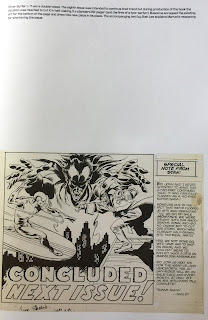 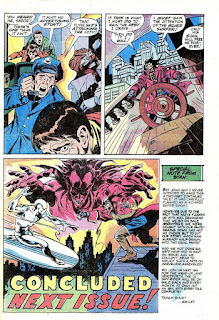