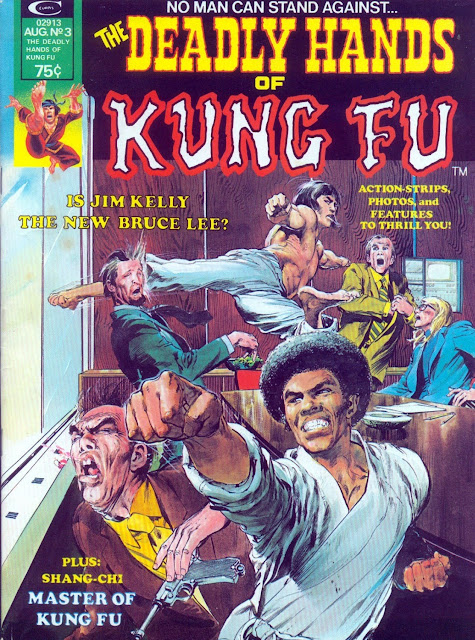 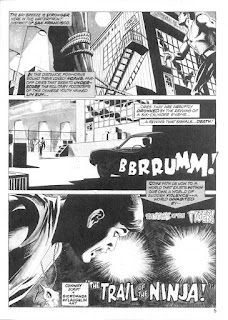 Hey, it's been awhile since we looked in on Master Kee's students. When last we saw the boys, we got an origin story, and were dealing with a tale of revenge. Master Kee had been murdered and Lin Sun, his student, had rounded up his friends Abe and Bob to assist him in meting out justice. So we're back in The Deadly Hands of Kung fu #3 (there was no Sons installment in the second issue), with the same creative team - although Frank McLaughlin joins the party this time as inker over Dick Giordano. Enough of this intro stuff - let's get to the story!


Lin Sun is on the trail of Master Kee’s killers. When his tracking takes him to a wharf in San Francisco, it looks like his revenge mission will end abruptly. Evading a speeding car bent on his death, Lin Sun is subsequently attacked by the same ninjas the Sons had fought previously. To Abe and Bob, we find Abe consumed with guilt for not offering to help Lin Sun. Talking Bob into assisting, they pursue Lin Sun. But when they find him, he is a prisoner of Lo Chin, possessor of the sonic cannon and bent on the deaths of the Sons of the Tiger!

I mentioned the first time around that I don't have a heckuva lot of experience in the martial arts comics. As a kid I passed over Shang chi's book, and Iron Fist as well. I liked Karate Kid as a member of the Legion of Super-Heroes, but did not own a single copy of his book; ditto Richard Dragon. You know by now that as a kid I owned not a single B&W magazine - so when I come to these stories now, it's with a sense of nostalgia only. The eyes are fresh. 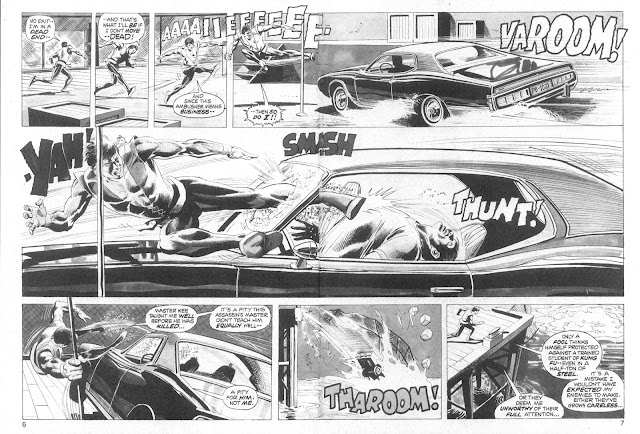 The Good: This story, like the first installment, was 15 pages long. But there was a whole lotta fun crammed into that space. The plot carries over quite a few issues, however, so it would seem to me that once the day's agenda is set (in this case, pursue Master Kee's murderers, kick some arse, get into trouble, kick some more arse on the way out of trouble, and face the cliffhanger du jour), the pictures do the talking. And do they! I praised Dick Giordano's work back in December - the camera angles, panel layouts, choreography of the fights, and so on. Sure, the story is chock full of unbelievable moments - such as Lin Sun snatching a throwing star right out of space and hurling it back - but that's the point. These kung fu stories are just fun. It's sort of like watching hockey - did you care about the outcome, or just the fights? Most people, it's the fisticuffs.

Which is not at all to detract from Gerry Conway's words - they're fine. The plot's fun. I like seeing each issue how the boys get closer to their objective, only to find the plot thickening as new layers are added. I think the slow reveal of shorter stories and published on a bi-monthly schedule would have added to the savoriness of the adventure. I also enjoy that each character has his own voice, even if they do fall somewhat into racist stereotypes. I can get on board with these comics being a slice of the historical record. I don't need any disclaimers - they are what they are. No further judgments are necessary. 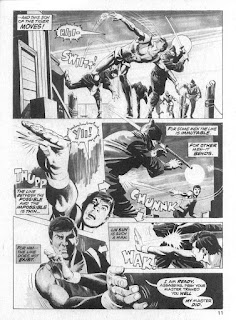 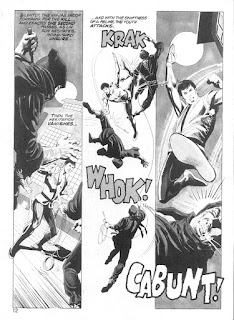 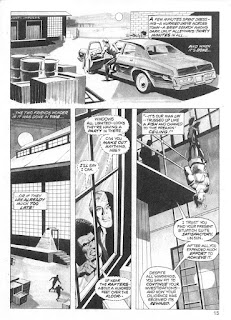 The Bad: The sound effects! Man, these made me laugh at times. They're actually very good in the two-page spread I included above. However, at the conclusion of that scene on the wharf, Lin Sun punches a ninja in the head. Not only does the dude recoil some 25 feet out into the harbor, but the punch has the sound of "BAWHOOM!" Dang... that's some punch... There are a few other instances that made me smile as well.

In my first review of the Sons of the Tiger, I'd knocked on the oath a bit - called it pretty hokey, basically. But here it was OK - sort of grew on me with a "Flame on!" or "It's Clobbering Time!" vibe. I used it more as an alert that it was game on, and the fists and feet would furiously fly very soon. 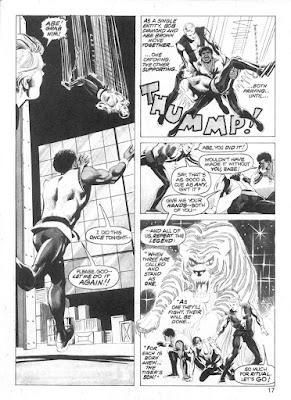 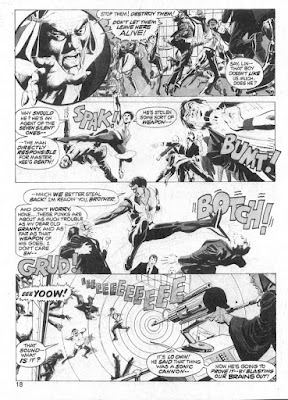 I wasn't entirely sure if Abe was exaggerating when he told Bob that Lin Sun was suspended about 100 feet in the air. I am going to assume it was 100% hyperbole. Otherwise, when Lin Sun is dropped and Abe catches him... well, I am not going to work out any physics equations, but I am going to say that 180 pounds of kung fu fighter descending rapidly from a height of 100 feet isn't going to be caught. Not a chance. Big time splatter is what that would be.

The Ugly: Ah, I suppose I can pick on the name of our baddie in this issue. Lo Chin seems more light a weight problem than anything scary. Not sure what to make of it. It's a humorous name, I'll give you that. Menacing? Nah...

At some point I'll dig back into the Deadly Hands of Kung fu Omnibus. I need to review a tale from the aforementioned Shang chi, as well as the Sons of the Tiger under the influence of a young George Perez.