Hello, I Must Be Going 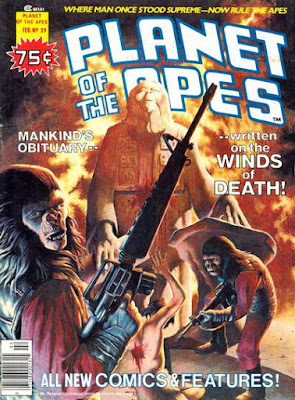 What's this, you say? This, my friends, is where Black & White and Bronze Age Comics goes on hiatus. Yesterday's closing review of Maus was not only the realization of a long held goal (and labor of love) to review that classic tale, but somewhat coincidentally it marked exactly one year since publication began in this little corner of the Internet.

I'd mentioned back in June that I thought posting had the potential to become sporadic. Although the first month of my summer vacation, June was particularly busy for me family-wise. But I caught a second wind and was able to spend several days through the end of the summer getting ahead. In fact, by Labor Day I'd scheduled all the way to the end of October! That was a good feeling, since I knew this school year was going to present many new challenges for me. I've been appointed to a new position, largely administrative, and it has greatly restructured my life with numerous meetings and classroom observations each day - and consequently made the nights challenging for writing from an energy and focus standpoint. So it's best to lay this thing to rest, at least for the time being, while its pulse is still strong.

Here's what I said as this blog began:


"...my initial ambition is to highlight Bronze Age artists who excelled in the black and white format. In the future, you might see reviews of full stories or of pages or even panels. I'll identify the penciler and inker, and sometimes we may just discuss that pairing  - was it a good fit? On other days you may see sketches, or pages of original art. And we won't necessarily be limited to just the Bronze Age - watch for anything from Golden Age Batman newspaper strips to Jeff Smith's Bone to pencil art from Batman comics of the last decade. While my personal comics wheelhouse of 1973-1980 may receive the bulk of attention, hopefully there will be at least a little something for everyone!

Just to give an idea of where this may go, here's an incomplete inventory from my comics library:
...and several Marvel Essentials collections, numerous Artist Editions, etc."

If I self-assess, I'd say I met those goals and then some. Throughout the year I received some nice recommendations here and on Twitter. I read some Vampirella stories for the first time, as well as Solomon Kane. I stumbled across a hardcover reprinting of the Blazing Combat series while in Washington, DC last July and purchased it. What a Wow!-factor that book had! I love the diversity of the black & white format, and the roll call of spectacular artists fluent in the genre never ceases to amaze. 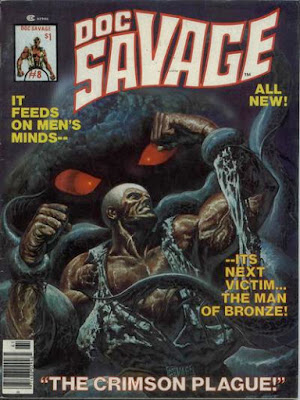 But it's been a nice run. Here's a tale of the tape, current the night before this posts.

Most viewed post: Claws vs. Talons, in the Savage Land Sky!
Post with most comments: John Byrne's Star-Lord
Number of reviews: 50
Number of creators mentioned: 118

Thanks for putting up with me, and for your interest in the material I've covered. My love of this material has grown over the past several years, but definitely during the past 12 months. I appreciate those who made recommendations to me, and pledge to enjoy those resources moving forward. My "tolerance" for non-superhero comics continues to improve, and I've experienced real joy in some of the new genres or books I've tried. As my friend Karen long ago said, we live in a Golden Age of reprints, and I am so very thankful that much of the black & white material from the Silver and Bronze Ages is readily available to fans.

Be sure to use the navigation features on the sidebar to get at old reviews and artist appreciations. And leave a comment - I'll see it and will interact.

Be well - and whenever I decide to scratch a new itch, I will certainly publicize it on Twitter so that you might come back and enjoy some pretty pictures and perhaps a bit of conversation. Thanks.