Remember a week ago when I mentioned that posting might be irregular moving forward? Today's one of those days... except to avoid a big fat nothing, I'm going to subject you to a summer rerun. My sister and her kids are concluding a 10-day visit today - they live in eastern Washington, near the Canadian border. They've stayed with us for the duration and have had a great time - a couple of day trips to Chicago, lots of family meals, and she's had the chance to show her family around the places she grew up. Solid family times.

But I'm not leaving you without something good. This post originally ran on August 16 2013. It garnered 8 comments back then - we'll see if it's worthy of further conversation today. So thanks for putting up with my "dreaded deadline doom". If you came here to see my review of the final chapter of Maus, volume 1, I hope to have that up either Thursday or next Monday. For now - enjoy some Dave Cockrum art on the character he loved! 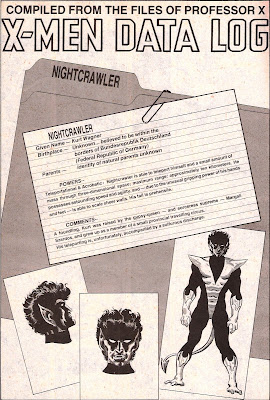 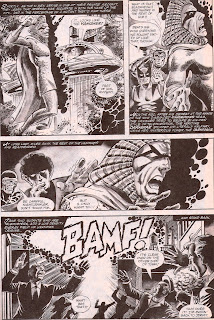 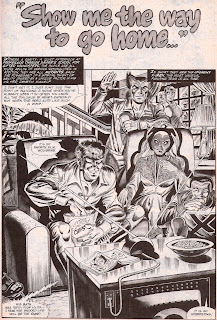 Doug:  How about this for a splash page?  That's some good Dave Cockrum X-art, isn't it?  And did you notice that Dave placed himself on the cover of the TV Guide?  Funny guy...  Today concludes our trip through this magazine.  We've previously toured the Phoenix and Iceman entries and today we'll finish the excursion with a look at the fuzzy elf, Nightcrawler.  You'll notice that Jo Duffy is responsible for the script, as she was on the Iceman tale.  I felt that that story was not terrible, but mediocre.  We'll see how this one goes.

Doug:  As the team watches an old Zorro flick an alarm suddenly goes off in the mansion.  The team recognizes it as emitting from Cerebro, but at a pitch they've not previously heard.  Nightcrawler, on Cyke's orders, "bamfs" ahead to check it out.  As the team arrives to the control room, Kurt Wagner has a wry smile on his face -- Cerebro has detected half a mutant!  So, it's into a cruiser and off to Poughkeepsie to check it out.  Upon arrival, they find the Vanisher, last seen in battle against the Champions and frozen in the Darkforce of Darkstar.  And there he stands -- half a mutant!  Cyclops warns Kurt not to touch the Vanisher, but you know how that goes -- Nightcrawler reaches out and then there's a huge "BAMF!" 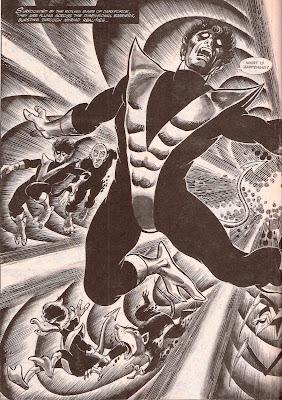 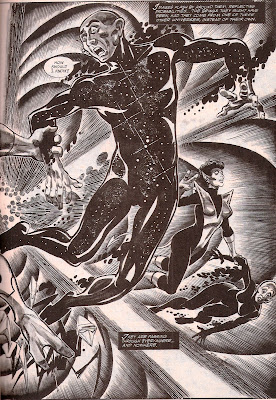 Doug:  Yeah, he really shouldn't have touched the Vanisher in the middle of that Darkforce.  That loud "BAMF!" sent the two teleporters through time, space, and dimension to lord-knows-where.  As they finally slipped back into reality, there was a separation and Nightcrawler landed on a planet full of shapely females -- offering him to be their god or king! 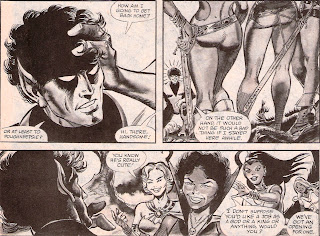 Nightcrawler's flattered, but takes the high road and tries to teleport away.  But instead of "bamf!", we hear "poot!"  Now, in the presence of fine-looking women that's not exactly the best noise to make!  It sets in pretty quickly that ol' Kurt Wagner isn't going anywhere soon.  Some unknown distance away the Vanisher has landed and is having a similar experience.  However, being an egomaniacal villain, he's trying the high-and-mighty approach, even as he too is offered godhood and/or a kingship. 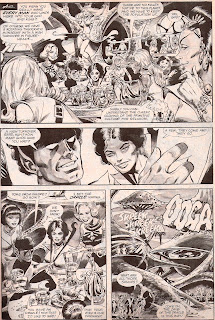 The women find him humorous, and despite his failed attempts at manipulating the Darkforce, the ladies decide to keep him.  So they literally drag him off to places yet unknown to us.

Doug:  Scene-shift back to Nightcrawler, who has been set up like a shiek or sultan with the ladies as his harem.  It's definitely a wine/women/song setting.  It gets pretty cryptic in a hurry, as Nightcrawler enjoys himself but with lots of questions.  The ladies (by the way, check out the various costumes in the story -- seems like some Legion wear might be sneaking in here and there) tell him that males are not native to their planet, so when one arrives they make him their god or king -- to further the population.  But, they also tell, the gods and kings never seem to last too long.  An oracle is mentioned, and Nightcrawler says he'd really like to see that.  So it's up from the table and off on a short field trip.  Inside the cave of the oracle, Nightcrawler is stunned to see a television!  Once turned on, a little old lady, looking like Granny from the Looney Tunes, greets him.  She tells Kurt that all he needs to do to get home is to go to the Well at the Center of Time. 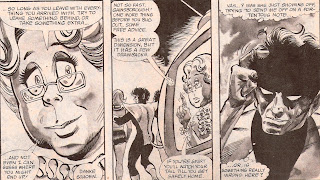 It's a crater only a few miles away that can transport him right back home.  However, she cautions that if he takes anything from there, or leaves anything behind, she can make no guarantees -- he has to leave exactly as he came in.  And then as he and the escorts turn to leave, the oracle tells him to watch his tail while he's there.  Huh?

Doug:  We cut to another part of the world where the Vanisher has set himself up as a god.  The locals are waiting on him hand and foot, but the Vanisher is stuck in his old ways.  He looks at each piece of treasure bestowed upon him and wonders how he could fence it!  Suddenly Nightcrawler steps forward from the shadows, spooking the Vanisher.  Nightcrawler tells him what he's learned about leaving, but the Vanisher rebukes him -- he ain't going!  So the X-Man says if the Vanisher won't come along peacefully, he'll have to go by force!  The Vanisher throws a vase at his would-be abductor, and then appropriates a sword. 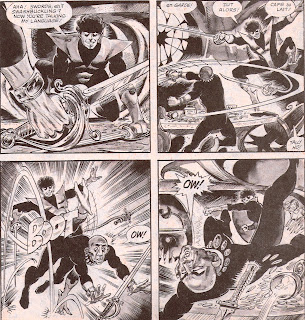 "Swashbuckling?" says Nightcrawler, who then grabs a cutlass of his own.  The two men duel, with Nightcrawler getting the better end of it all.  He finally subdues his foe, and bodily removes him from his harem.  As the two Earthlings march out, the women tell them to be careful -- they seem not at all bothered that the "gods" are leaving.

Doug:  Nightcrawler hustles the Vanisher to the Well at the Center of Time.  Upon seeing it, the Vanisher emphatically declares that he's not jumping into that crater.  He then uses the Darkforce to craft a huge hand, pick up Nightcrawler, and drop him. 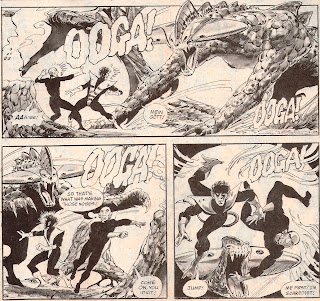 Nightcrawler is losing his patience quickly, when the Vanisher pulls a "sheet" of Darkforce from his body and hurls it at Nightcrawler.  Kurt's engulfed in the stuff, and disappears!  As it's like one big shadow, Nightcrawler did a fade-out.  However, upon returning he encourages the Vanisher to restore the Darkforce to his outer covering -- it's apparently wearing a little thin.  At that moment huge beasts rush the two mutants, forcing them to their only recourse -- jumping into the crater.  They do, and fall back through the inter-dimensional abyss.  Back in Poughkeepsie, Nightcrawler and the Vanisher reappear right where they'd "BAMF!"ed out only seconds before.  The Vanisher tries to go all Mr. Threatening on the X-Men, but his steam is lost when he notices he's... naked!  His teleporation powers restored, he gets outta Dodge pretty quickly!  Storm asks Kurt for an explanation and all he tells her is that he's been to paradise... and someday he's going back!

Doug:  This story, of the three in the book, would have looked the best in color (although it is striking in the format you see).  I imagine it would have looked something like the Thing/Hulk graphic novel The Big Change.  I thought this story was a nice way to end the magazine -- pretty light and breezy fare.  Cockrum just had a passion for Nightcrawler, and that spirit shines through the art.  It's fun.  Overall, I'm not sorry I own this magazine -- if I hadn't said it before, this was the first time I'd read any of these three stories.  They're all OK -- if I had to rank them, I'd probably go Nightcrawler, Phoenix, and Iceman.  However, the Iceman story far and away looked the best -- it was just beautiful!  Bronze Age X-Men -- that's just never going to be a horrible experience, is it?  Nope -- like golden days of yore.  Thanks for sticking with me over these past three months! 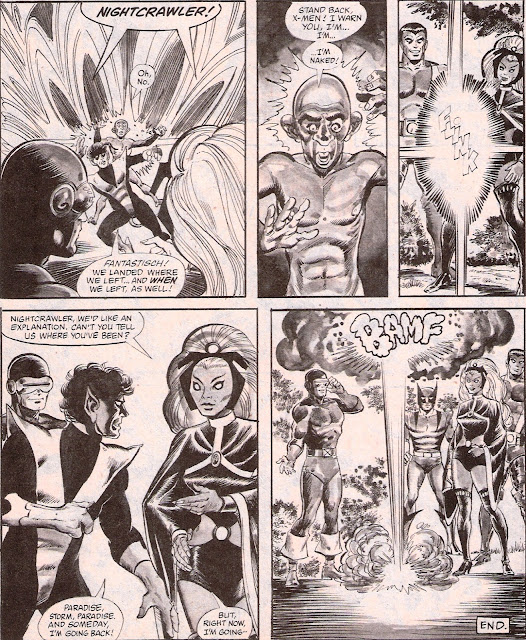