"Aftermath!" - a Review from Blazing Combat 1 I don't often grab a book right from the shelf and buy it. While I can be an impulsive shopper, I tend to be patient with books. Call me a slave to online discounts, but I get butt-pains in the wallet area when I think of paying full price for books. I know, I know - when the brick-n-mortar stores are dead and gone, I'll have that blood on my hands. I know. But hey - not only did I snag the Fantagraphics Books totally-awesome hardcover collection Blazing Combat while I was in Washington, DC last month, I also purchased George Takei's autobiography They Called Us Enemy (I have a review of this scheduled later in the fall) at cover price. Maybe I'm turning over a new leaf.

Blazing Combat lasted a mere four issues back in 1965-66. In the introduction to the hardcover collection, editor Michael Catron tells that the series was scuttled by the United States military, comics wholesalers, and the American Legion. As Archie Goodwin's tales took a sympathetic bent toward soldiers as people - as moral agents, and definitely toward "war is hell", some of the powers-that-be felt that it was unpatriotic. At a time when US involvement in the Vietnam War was escalating, the book was certainly politically charged. And apparently too hot to handle. But what Warren wrought in those four issues is a feast for the eyes, with talent like Frank Frazetta, Wally Wood, Gene Colan, John Severin, Russ Heath, Redd Crandall, Alex Toth, and many others providing the art. The collected edition is absolutely beautiful - one of the best looking reprints of black-and-white comics that I own. Catron writes that Fantagraphics used the original printer's films "for the finest quality possible". He ain't lyin'. 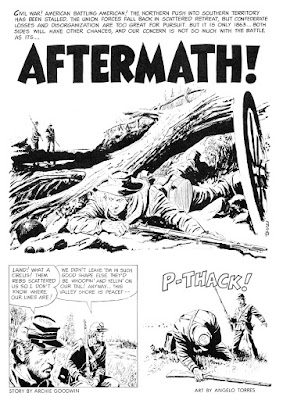 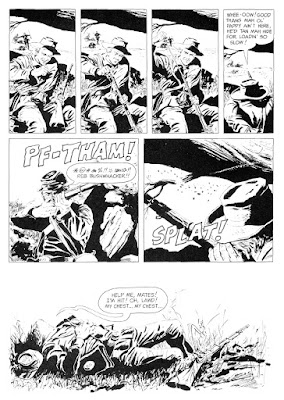 Let's do our thing. Today I've chosen the second story in the book, a troubling examination of themes from America's Civil War.


Set in 1863, we’re dropped into a scene of standoff. The Union forces have scattered the Confederates, save one Rebel who has a bead on two Union men. Getting off a clean shot, the Rebel drops one of the men in blue. Forced to find cover, his partner can’t move. But as the shot man cries out and it’s obvious that his death will not be immediate, the Rebel calls to his enemy to assist his friend. The Rebel goes so far as to call a truce and assist in helping his victim. What happens when enemies come face-to-face?

The Good: Angelo Torres's art is superb, as your own eyeballs can attest. I did not mention Torres above when I rattled off the hall-of-fame caliber participants in this series. But I'm telling you, the man can hold his own against any and all comers. Wow. If I'm not mistaken (and at this writing I am not terribly far into the book), in each story the artist worked alone. So you're getting the whole Angelo Torres enchilada. And it's beautiful.

The Civil War is often described as brother against brother, and the common threads that bind these enemies together - duty, honor, self-preservation - may as well make them brothers. When the survivors meet in their mythical no-man's land, they share jerky and tobacco and a common hatred for the wild hogs that they know will eat the dead warrior. But as they sit down, perhaps to further explore their similarities, one sentence blows it all up. Perceptions, history, political affiliation, and the banners we wave all congeal to immediately end the ceasefire. The end is swift, painful, and Archie Goodwin leaves us with the question of whether or not it was inevitable. I paused upon completion and wondered if we aren't traveling along that same path in our times. It's scary... perhaps we are.

The black-and-white mags are heavily populated with short stories, and Blazing Combat has only that - six to eight page tales. The creators largely knock it out of the park despite the confined space. Lots of plot as well as character reveal in these six pages. 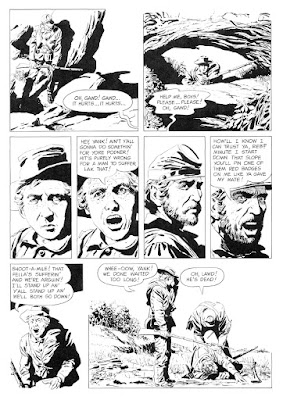 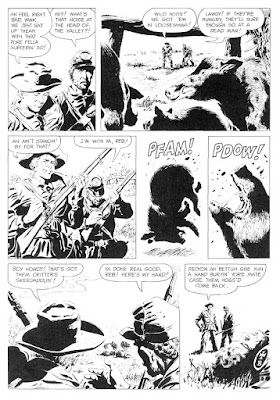 The Bad: Archie Goodwin did that thing for which Chris Claremont has been maligned, and that's attempting to write characters with accents. Works well (generally) in film, not so much in literature. In film, we can largely tell what the character is saying despite changes in tone or inflection; on the printed page, however, it can get a little wonky. Admittedly, on my reread for this review I did not find it as much a distraction on my first tour. Goodwin does it again in the very next story, which was set in the late 1930s.

The thought of the hogs feasting on dead soldiers and/or civilians is a stomach-turner. 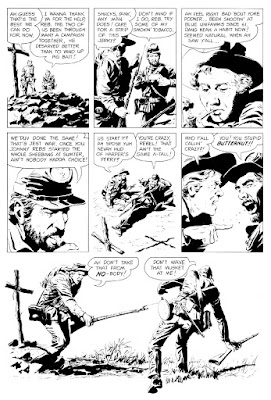 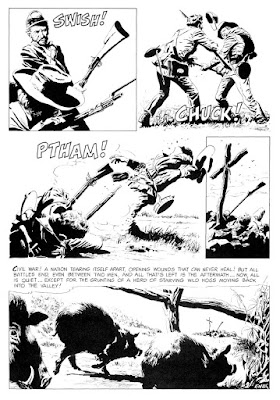 The Ugly: War sucks. People suck. Hatred sucks. Those seem constants in life that I'd love to see broken during my lifetime. I hold on to optimism, that some day we'll figure it out. Each semester in the introduction to my Social Injustice class we analyze the lyrics to Sly & the Family Stone's Everyday People. It remains pertinent learning.