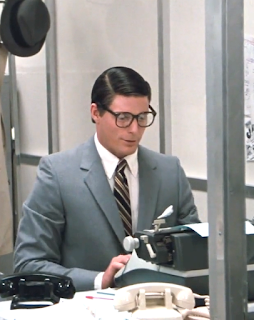 Doug: We're in for a treat today, friends. Going back several years, the Bronze Age Babies regularly featured guest writers. When I started this new blog, I knew there would be times when I wouldn't be able to meet my goal of publishing twice weekly. So right from the top, in pre-blog publicity to friends who'd stood by us at the BAB, I made an offer to all writers with an idea - bring it, try it, I'll make it happen. Today I'm quite pleased to feature the thoughts of Simon, he of The Glass Walking Stick. Simon's been a contemporary and friend of ours for many years. We now interact primarily on Twitter, and I think you'll find him thoughtful and right in line with the love of Bronze Age comics we all share.

Doug: In one of the stories featured below, you'll see a Holocaust-era tale by Archie Goodwin and Gene Colan. That story is reprinted in a book I purchased in the spring: We Spoke Out: Comic Books and the Holocaust, by Rafael Medoff, Neal Adams, and Craig Yoe. It's a wonderful collection - quite thought-provoking as you'd imagine. It's also an effective survey of just how that event has been handled from shortly after the War to the near-present. Simon has inspired me to give my own spin to "Experiment in Fear!" at some distant time.

Doug: Now, enough from me - let's get to the work of today's guest writer. 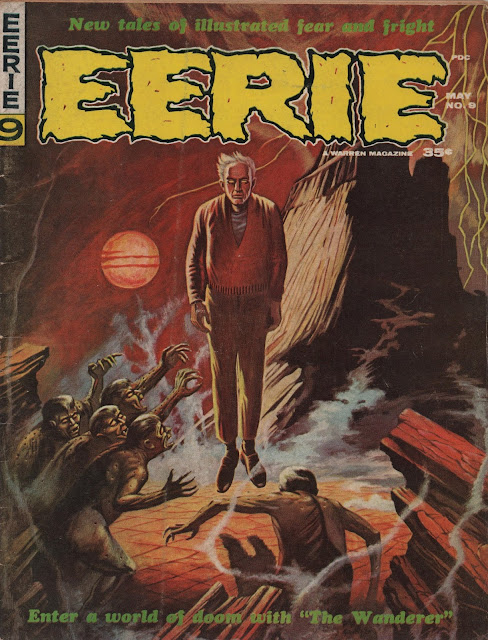 
Simon: Hello. First of all, many thanks to Doug for kindly inviting me to do a guest post here at Black & White And Bronze! One of the most significant aspects of the B&W comics of the Silver and Bronze Ages is that they allowed artists to break out from the restrictions of the four-colour comics. The lack of Comic Code approval meant stories could be more adult (or adolescent at least...), while artwork could be presented on larger pages (typically 11" x 8.5" instead of 10" x 6.5") and the B&W format allowed for more artistic experimentation. The leader in the larger-format market was Warren Publishing who struck (monochromatic) gold with their horror mags Creepy, Eerie and Vampirella. Although Marvel, Skywald and Atlas attempted to replicate this success they never came near to Jim Warren's creepy creations. I'm going to spotlight an issue of Eerie, #9 from May 1967, which may be stretching the definition of the Bronze Age, but which is a great example of the artistic delights of the format. Behind a suitably, er, eerie cover by Dan Adkins, this issue contains some sterling work by top comics creators Archie Goodwin, Neal Adams, Steve Ditko, Gene Colan and Adkins himself. We'll start with Sturdy Steve... 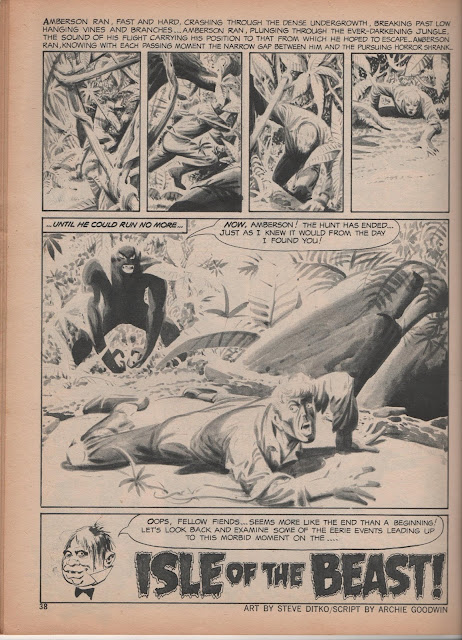 Simon: "Isle Of The Beast" is a self-aware twist on that hoary old chiller, "The Most Dangerous Game", in which a hapless shipwrecked sailor finds himself pursued across a desert island by a sadistic big-game hunter. For those familiar with Ditko's super hero and fantasy work for Marvel and Charlton this must have been a revelation as the artist used the freedom of the B&W format to work in a beautiful "wash" style, with varying shades of grey and black achieving masterful effects. This painterly approach is evident on this splash page as Ditko creates wonderful three-dimensional landscapes with nary a "hard" inked line in sight. See the contrast between the dark, devilish form of the villain, the delicate impressions of jungle foliage and the Eisner-esque folds and creases in the sailor's clothes. These effects simply wouldn't have been possible in a colour comic, given the printing capabilities of the time. 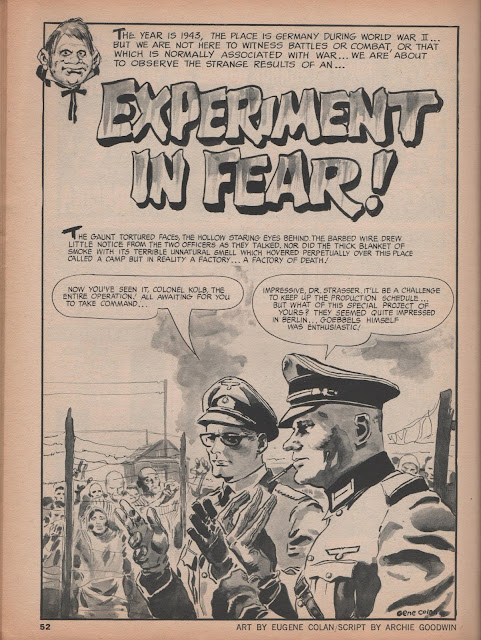 Simon: By contrast, Gene Colan's artwork for "Experiment In Fear!" shows how these techniques could amplify the realism of Archie Goodwin's hard-edged script. Colan was an artist who always worked superbly with light and shade in his pencil work - something many of his inkers struggled to convey in the finished product. As seen on this splash page, Colan inks his own pencils here and also adds wash tones which give the faces of the main characters a palpably three-dimensional feel. This is suitably ironic as these characters are Nazi officers whose cruel experiments on Jewish prisoners mark them out as more inhuman than any of the supernatural antagonists in the rest of the magazine. The realism of the artwork makes this story, for me, the most chilling piece in this issue. 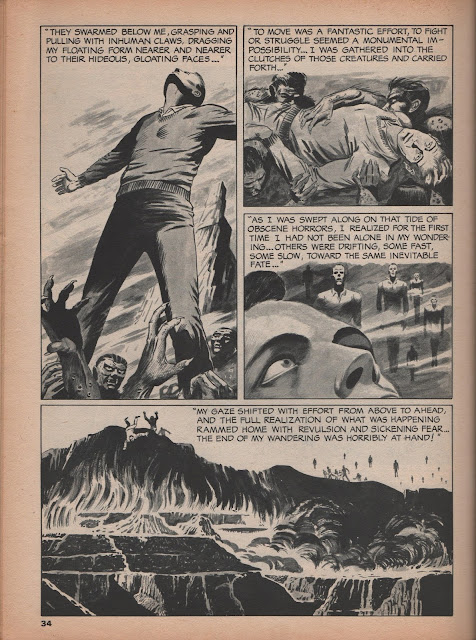 Simon: Finally in this trilogy of terror, we meet "The Wanderer" in a moody fantasy from Goodwin and Dan Adkins. This eerie, eschatological tale of a man's soul trapped between life and death takes us on a journey through a black and white limbo. Adkins' work was often oddly static but here it seems appropriate as the main character floats helplessly through a hellish afterlife. The interplay of light and shadow on the unnamed man's face perfectly conveys his wonder and horror, while the final panel beautifully evokes the heat and turmoil of the fiery pit... and all in monochrome.
Doug: My thanks to Simon for his analysis and presentation today - all images are scans of the magazine itself. And it looks to be in great shape, even 50-some years later! Now for your part - please feel free to leave a comment with your own impressions.
at January 17, 2019