Super Blog Team-Up: The Redemption of Red Sonja - a Review from SSoC 1 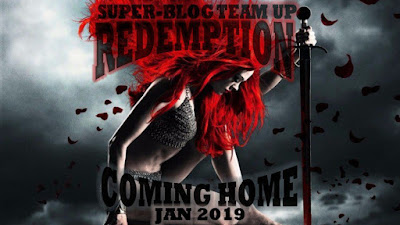 Welcome to the first Super Blog Team-Up of 2019. I'm somewhat of a seasoned veteran of these interweb collaborations, but this is my first appearance as a solo act on this blog. I'd encourage you to check out my previous participation as one half of the Bronze Age Babies. This time around we're discussing Redemption. When Charlton Hero of the Superhero Satellite approached me about joining today's fun, and of course knowing my focus on black & white comics, it didn't take long to choose today's topic. 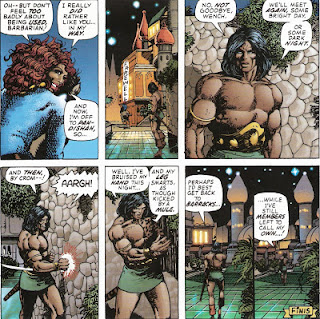 Several years ago on the Bronze Age Babies blog I'd reviewed Conan the Barbarian #24, "The Song of Red Sonja". That post, as well as quite a bit of reading of Savage Sword of Conan mags, made this almost obvious. Here's a snippet from the end of that Conan post:


Doug: Sonja explains that the wizard of Pah-Dishah had given her an incantation to keep the serpent tiara an actual crown. However, she forgot what to say as she first held the precious bauble. Sonja offers Conan to take as many jewels as he can carry - he declines, saying he has to live yet in the city. Then he tells her that he fought tonight, after all, for other rewards. Leaving the tower, Sonja rappels quickly downward, far faster than the Cimmerian. He calls to her to slow down, but as she hits the ground she quickly lights the rope afire. It literally burns through Conan's hands, and he falls hard to the ground. Stunned, with legs that won't work quite right, Conan nonetheless reaches Sonja - who is not atop her mount. He tells her that she'll pay him now with kisses aplenty.  She explains that no man shall have her, lest he first best her in battle. And that is something (as she rides away, knocking Conan down yet again) he shall not do this night.  Beyond angry, Conan smoulders as he limps back into town - vowing to have that woman, even if she least expects it.

Today I want to delve into Sonja's next appearance, her 3rd overall. This would come in the pages of Savage Sword of Conan #1, of course in the black & white format. It's worth noting that the shift from the color monthly to the B&W mag also brought a change in artist, but perhaps more notably a completely revamped look. And what a look! Designed by Esteban Maroto and approved by Roy Thomas, John Buscema brought the chain-mail bikini to the masses - and in the first full-panel reveal, an iconic image. Let's look then, at a 100-Word Review:


Zamora’s “Maul” finds a certain Cimmerian in search of debauchery. Approached by a trio of ladies of the evening, Conan contends that he has no money for… drinking. Enticed, Conan strides deeper into the Maul in search of “skulls to crack”. However, a cacophony of screeching, fleeing priests draws our barbarian into adventure. Soon overwhelmed in a brawl of swordplay, Conan’s would-be murderer is himself run through – by Red Sonja. Renewing grudges, our Hyborian heroes set off to solve the mystery of a severed-but-bejeweled finger. Sonja tells of a wizard executed and a curse – the Curse of the Undead Man, upon the head of Berthidla the Brythunian.

As is my general habit in writing reviews, let's examine this 18-page tale in a 3-tiered judgment. 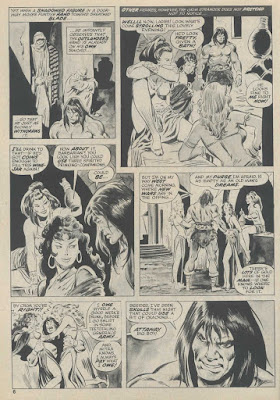 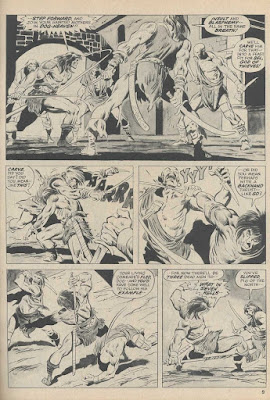 The Good: I think it's appropriate whenever reading a John Buscema-penciled story to heap praises on the art. This story would be no exception! I'm not always the biggest fan of Pablo Marcos's inks, but his performance is pretty solid over Buscema here. On Savage Sword, I've generally preferred Alfredo Alcala and sometimes Tony DeZuniga over Buscema. But Marcos doesn't fail Buscema or the readers in this story. Anyway, the panel layouts are typical Buscema - no barriers broken, but a nice double-page spread in the midst of the action. Red Sonja is suitably sexy, although with little left to the imagination in her new "outfit". I preferred her in her original Barry Smith-designed garments (regardless of how impractical the hotpants were). 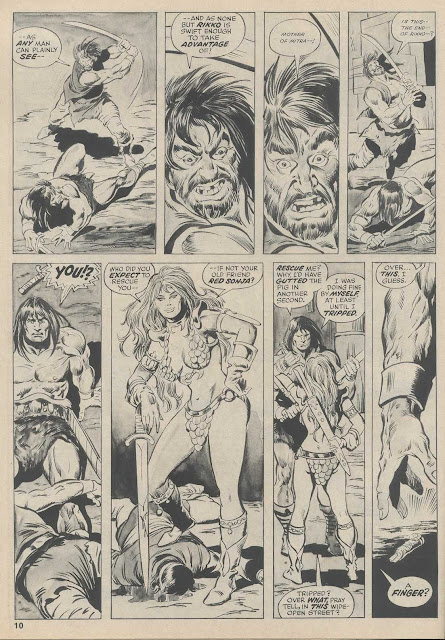 John Buscema excelled at two things in the sword and sorcery genre - beautiful women, and ugly bad guys. There is no shortage of either here. From the prostitutes who greet Conan on page 2 to the thugs overpowering him in the first battle, Buscema just turns it loose. The choreography of the execution of the wizard Costranno was also top shelf. Another excellent scene that turns up time and again in Buscema-illustrated Conan yarns is the bar brawl. We get that, and are better for it. This one is especially fun, as it's Sonja who deals out lessons. 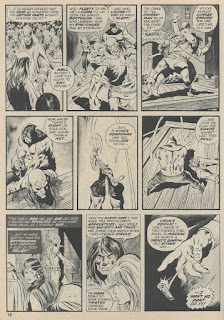 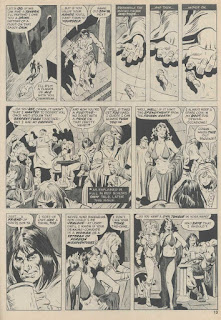 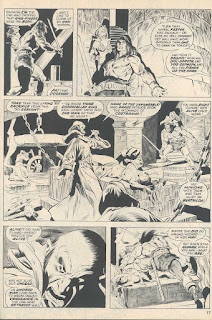 I enjoyed the interplay between Conan and Red Sonja. Conan was of course still smarting from her treatment (and besting) of him in their previous adventure, and her rescue of him near the beginning of this story only poured salt in that wound. 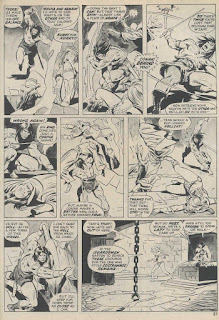 But Roy Thomas writes some effective banter, the two mercenaries support each other in battle, and the last panels of the story leave just enough open to the reader's imagination to believe that all previous transgressions are forgiven and that a flagon of wine will indeed be shared. Red Sonja had redeemed herself in the eyes of the barbarian. Now, whether or not he got that kiss is another matter...

The Bad: I'm really waffling on the plot here. I've read this story three times, and each time I just feel that my cup's not quite full. Don't get me wrong - I like it. It's just different from a lot of Conan stories. Conan himself wasn't wronged, no one is out to get him, he's not after some treasure of any sort, he isn't seeking to protect a female "friend" (although he does venture deeper than he needs to out of a sense of honor). This one is a sort of mystery. Again, that's not bad... just different. I didn't mind that Conan and Sonja had a chance encounter - those things can always be explained away. See what I'm doing here? Waffling. To firmly put my finger on it, I guess I'll say that there was nothing new here. Wizard, thugs, monster, tons of swordplay... just a solid Conan story. There was a slight twist at the end - that Berthidla the Brythunian wasn't all that thankful toward our heroes for the rescuing. But even that seemed to be easily written off by Conan and Sonja.

But you know what this really was? A vehicle. A vehicle to launch Red Sonja into a solo color book and further appearances in the B&W mags. Granted, it would take a little over a year for her Marvel Feature series to begin, but in the interim she showed up seven times in various barbarian-themed periodicals. If that's the worst thing that could happen, then my concerns are misplaced.

The Ugly: I think I always put a character's countenance in this section when I review a John Buscema tale. No human stood out to me, so I'll just mention the big hairy arm that rose out of the pit in an effort to pull Sonja below. That had to be scary, and what was on the other end of that limb must certainly have been unpleasant. 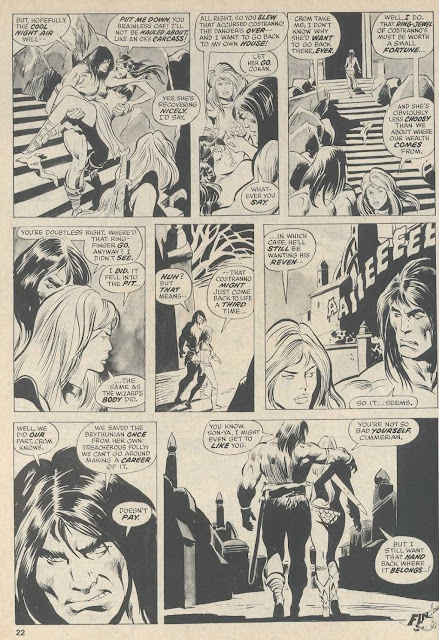 Please patronize the other blogs and podcasts in today's event. You won't be sorry to have invested a bit of time along the way!

Between The Pages Blog:  The Secret Origin Of Spider-Man
https://betweenthepagesblog.typepad.com/between-the-pages-blog/2019/01/the-secret-origin-of-spider-man.html

The Unspoken Decade: What If V2 #46 and #47
https://theunspokendecade.com/

In My Not So Humble Opinion - The Other Side of the Wind - The Redemption of Orson Welles
https://benjaminherman.wordpress.com/

The Retroist Via Vic Sage
https://www.retroist.com/